Sometimes you may need to manually cut filled objects into smaller objects. This is important where changes in stitch direction are necessary. This is especially useful for editing converted TrueType fonts.

The design should be saved before you break it apart. Save to a different name so you can go back to the original compound object to edit if necessary.

The Break Apart tool allows you to separate appliqué objects into their components. It can also be used with monograms, lettering and blackwork runs. The effect on these objects is similar to the ungrouping operation. However, once it is broken apart, it cannot be re-grouped as a compound object again.

When saved into earlier versions of the software, monograms, appliqués, lettering, and blackwork runs may be subjected to the Break Apart procedure by default.

The Knife tool is used to manually cut filled objects into smaller objects. This is important where changes in stitch direction are necessary. Cut objects are generated with stitching – parallel or turning – appropriate to their shape.

The Knife tool has two modes of operation:

The Knife tool is especially useful for editing converted TrueType fonts. When you select a TrueType font in the Font list, it is automatically converted to embroidery lettering. 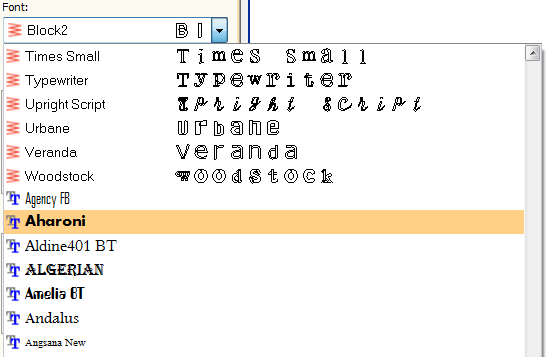 While TTF conversion produces similar results to digitized embroidery fonts, the quality may not always be quite as high. Narrower serif type fonts generally produce the best results. However, in 99% of cases, conversion problems can be fixed with the Knife tool. When you select a lettering object to cut, the object is highlighted with a thick magenta outline.

With or without an object selected, digitize a cutting line as you would any other line – left-click for corner points, right-click for curve points – and press Enter. By default the software reorders resulting objects into a closest-join sequence that preserves the source object’s entry and exit points. Manually adjust object overlaps using the Reshape tool. See also Reshape objects.

Note that the Knife tool will cut both filled objects and outlines...